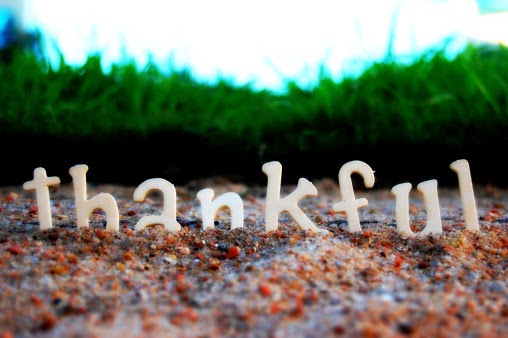 Happy Thanksgiving!!!! There are so many things that I am thankful for that it would be impossible to fit them all into one post. I am beyond blessed, and extremely grateful to be living a life filled with love, happiness, and a peace that helps me get through even the hardest of times. Furthermore, I am thankful for all the wonderful people in my life, including all of you amazing people who take the time out of your busy lives to read my blog. I wish you all a wonderful day filled with love, family, and good times :-)

Email ThisBlogThis!Share to TwitterShare to FacebookShare to Pinterest
Labels: Good Times, Thank you

I officially passed my first term of medical school!!!! Words can’t express how happy I am to finally be finished with anatomy (even though it’s my favorite subject, lol), and being able to have this last week off was soooo needed! I also know I said I would write a few posts and get things accomplished, but for the majority of the week I did absolutely nothing, and it felt so good! I caught up on sleep, watched TV, spent a day in a sauna, went to the movies, and pretty much did any and everything I wanted/had not been able to do these past few months.

On Friday, I headed to downtown Atlanta for the SNMA Region IV Medical Conference which was held at Morehouse School of Medicine this year. We started off with a tour of the school, and then we toured Grady Hospital which is the largest hospital in the state of Georgia. Later on that evening, a mixer event was held, and it was really nice interacting with other medical students from various schools in the region. I was also very proud of my school’s SNMA chapter for showing up in such a large number. After the mixer, there was another social event at a nearby bar, so we spent most of the night there and had a blast. I have not been able to go out much since school started, so being able to have fun with both my classmates and other medical students was a great experience.

On Saturday, the conference seminars started around 8am, and I was very impressed with the selections. “Preparing for the Wards” was the first seminar I attended, and it gave really great information on ways to stick out and receive excellent marks when we start rotations during our third year. After that I headed over to a discussion panel on women in medicine, and we discussed double standards against women in the profession, and the ways that we can stick out and assert ourselves in the field. I also attended a suture clinic in the MSM anatomy lab, and it was really nice to be able to see the difference between their lab and the one in my school. I was also excited when they let us keep the tools we used afterwards! My favorite seminar of the day though was a panel that discussed balancing our personal lives with medicine. It included married, single, and parent physicians, and they all discussed the ways they manage to make it all work for them on a daily basis. We concluded the conference with a banquet that had Dr. Montgomery Rice (Dean and President of MSM) as a keynote speaker, and she also came by our table to speak with us before the dinner began which was really nice. I truly enjoyed being in the presence of such amazing people, and the conference made me want to strive that much harder to achieve my dreams.

After the closing banquet last night, my classmates and I headed out on the town for one last night of fun before second term starts tomorrow. We danced the night away and had a ton of fun. I even lost my voice, so you know it was a good time, LOL! I’m starting to realize the importance of balancing medical school with a social life, and last night really confirmed that for me. Hopefully, this term I will be able to find that perfect balance that leaves me less stressed out. But anyway, I don’t want to ramble, so I guess I’ll end it here. We start second term tomorrow, and I am ready to put my best foot forward and really conquer this term. I’ll make sure to do a better update later on this week though, so until next time!

Check Out My Article in the JSNMA MAPS Minutes Fall 2014 Edition! 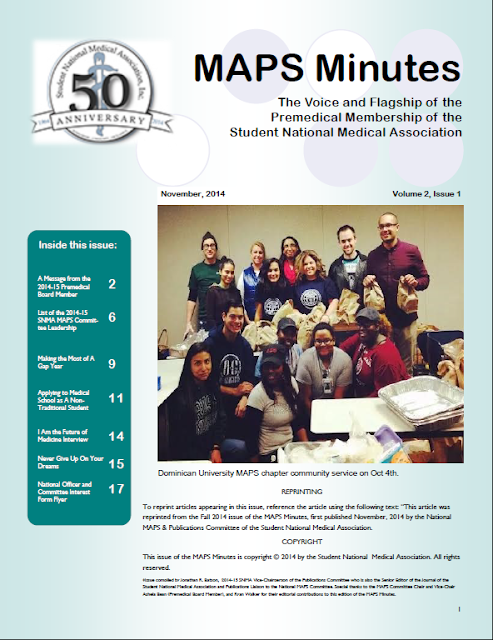 Two hours ago I completed my last final exam and officially ended my first term of medical school! I am so happy to finally be finished, and I am looking forward to a full week of relaxation, sleep, Netflix, and no stress! I also plan on writing a few new posts summarizing my overall experience during first term. For now, please check out my article on pages 11-13 of the JSNMA MAPS Minutes Fall 2014 edition. You can either click here or on the picture above to access the journal. Please let me know what you think and I hope it inspires some of you!

The Final Sprint: Finishing Up My First Term of Medical School!

In exactly one week I will have completed my first term of medical school! I’m even more excited that afterwards I will have a little over a week to relax and do absolutely nothing! This term has been quite the experience, and although I wouldn’t change any of it for the world, I’m definitely looking forward next term.

Yesterday, we not only had our last lecture of the term, but we also had our last anatomy lab session until we hit neuroscience in the spring. One of my classmates came up with the awesome idea of getting together for an informal class picture, and our class chair pulled it off flawlessly. Anatomy lab is probably the only time that our entire class is in the same room together, so it worked out perfectly. Our professors even got in on the action which made it even better. I’m definitely going to miss my time in anatomy lab. I absolutely loved dissecting (even if it was for 4 or more hours at a time), and it really helped with lecture to be able to visualize the structures. Plus, it really was a nice break from lectures. Starting second term, we won’t have any labs to help bring up our written exam scores, and the entire day will be filled with lectures. I have no idea how I’m going to handle straight lectures from 8am-5pm :-/

The good news about next term is we will be going from SPOM (which covered anatomy, radiology, histology, physiology, and embryology) to the Cellular and Molecular Basis of Medicine (CMBM). CMBM will cover biochemistry, cell biology, clinical medicine, genetics, immunology, microbiology, pathology, pharmacology, and physiology. This will be way more subject matter that what we covered in SPOM, but I’m excited because I’m already familiar with most of the subjects. Here’s to hoping my master’s degree in biochemistry comes through for me!

The end of the term also means final exams, and starting Monday I will have exams every day until Thursday, so I probably won’t post again until I am completely finished. My daughter’s birthday is also next week, so I will have to figure out how to celebrate and keep her happy with exams in the way. Oddly enough I feel really good about the upcoming written exam, but that can always go both ways, so please keep me in your prayers.  We also have an OMM practical along with a PCS final exam, so it’s going to be a very busy time. I hope you all have a fantastic week, and hopefully the next time you hear from me, I’ll be super happy :-)