It's My Five-Year Blogiversary! (Thank you Gift Inside) 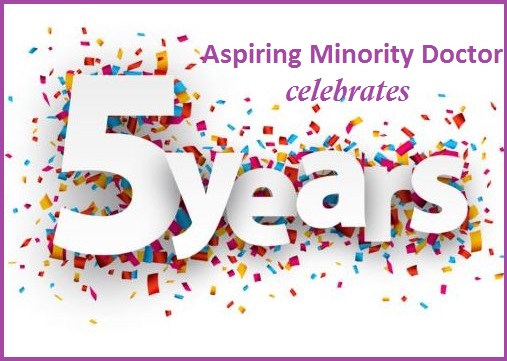 Five years ago today, I wrote my first blog post. I had no idea that at this point, half a decade later, I would have written literally hundreds of posts and reached my goal of being a source of encouragement and inspiration for others with similar circumstances. I also didn't even think that I would still be blogging, or even better, that at this point I would have already achieved my lifelong dream of becoming a doctor!

Over the years, I have used my platform to not only share my story, but to let anyone reading know that any goal is possible with passion and perseverance. I started this blog to help others, but what I wasn't expecting was how much I would be inspired and encouraged by all of my amazing readers. From the emails sharing your medical school acceptances and accomplishments to the TSA agent who recognized me and told me he will be applying to medical school next year, you all have brought so much joy to my life. I have smiled with you through the successes, pushed you through the tough times, and I've even shed a few proud tears at some of your stories of medical school acceptances and other accomplishments. You've even managed to encourage and inspire me to keep pushing, which is something I never would have thought would come from this.

So this year, as a thank you, I'm going to do something a little different. Below, you will find a barcode for a $50 Starbucks gift certificate. Please use it to buy ONE small cup of coffee, tea, or hot cocoa (meets the needs of people like me who don't drink coffee). I am posting this early in the morning and will wait a few hours before posting on my social media accounts so that my email subscribers get first dibs since this will probably only be enough for 10-15 people. Please be fair and only use it for one cup, that way as many people as possible can benefit. Just tap on the picture below from your phone to enlarge it, and have the barista scan it at checkout. Super simple :) 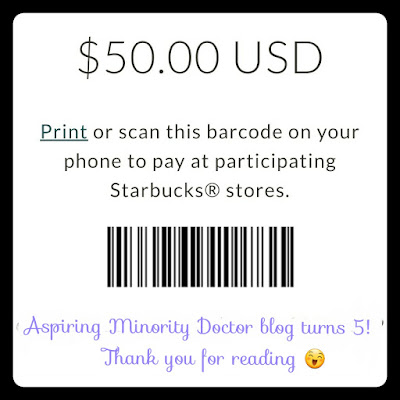 To all my followers who have been around since the beginning, thank you for sticking it out with me all these years. For the new followers, I hope you'll continue to follow along on the ride. And to everyone reading this, thank you for allowing me to share my story and for giving me a reason to smile. Wishing you a very blessed and wonderful week ahead!


I thought I was going to put out a lot more content following my last post, but that clearly didn't happen. Honestly, it hasn't been from having a lack of time since I'm currently off service and have had more free time over the past month and a half than I have had since starting residency. I think I've mostly just been experiencing writer's block, which is super weird given that I've had a lot of new experiences that really wouldn't have been too hard to write about. Oh well, I'll use this post to catch everyone up, and then I'll type a couple of new posts today to let everyone know what's currently happening in my world.


When I ended my last post, I was just about to begin my emergency medicine rotation. My first day was a complete culture shock! My first shift didn't start until 930am, so coming from the surgery world of 3am wake ups, it was super odd being able to sleep in. The work load was also much less intense. A couple of weeks prior to starting, I was informed that the service would also include internal medicine call which would begin on my first day. What this meant, is when my ER shift ended at 530pm, I would grab the night pager and head upstairs to function as an internal medicine resident until 6am. My first night was not only super busy, but a complete 180 degree turn from surgery life. We were swamped with new admissions, and notes had to include a lot of information that you typically don't see in surgery. For example, if a patient came in with something simple like a fractured hip from a fall, we didn't just workup that one problem, but we focused on what seemed like every co-morbidity the patient had. Whether it was their blood pressure or an episode of asthma that last occurred years ago, we left no issue unaddressed. That first night was a huge adjustment from my typical focus-based notes, and it was even harder considering the first half of my day was spent functioning as an ER resident, and that I had not been on an internal medicine rotation since my third year of medical school. Nevertheless, I quickly learned to adapt after receiving a few calls and texts from attending physicians the next day when I was post-call, LOL.


What I will say that I found to be the most shocking about call on a different service was actually leaving at 6am. During my surgery months, call doesn't typically end until after morning rounds, so you can imagine my disbelief at doing sign out at 530am and being out the door by 6am. Even better, during my ER month I had multiple full 24 hour days where I wasn't scheduled to work. That's right, full days where I wasn't groggy from being post-call and could actually sleep in and still have an entire day of productivity mixed with relaxation. I even had shifts that started later during the day, so a few times I ended up sleeping in, waking up to explore the city for an hour or two, and then getting ready for work. It was really nice being out in the sun each day and doing simple things like walking to the park and watching the calming river.


I guess the best thing about having an emergency medicine month, was the extra time I had to study. Last week, I took the final board licensing exam required for me to obtain a full unrestricted medical license (I'm currently under a training license), so I needed all the extra study time I could get. This exam (COMLEX Level 3) differed from the other ones I had to take in order to graduate from medical school because it was a two day exam that took place over 8 hours each day, and instead of only multiple-choice answers, it included fill-in-the blank responses and questions where you had to select multiple answers. It was definitely long and stressful, but since the two days aren't required back-to-back, I was able to sit for the first portion on Monday and have a couple of days to breath before taking the second portion on Thursday. I won't receive my score until February, but I am so glad to be over the board exam hurdle! Plus, whoever it was who decided to place a Prometric testing center in the same building as a whiskey bar is a true MVP, because a drink was very much needed after making it through 16 hours of testing in one week.


Right now, I am in the middle of an internal medicine month, and it hasn't been too bad. The hours are pretty consistent, and there are a lot of daily lectures and other learning opportunities. Oddly, this month has shown me how much I really enjoy and miss surgery, so I am itching to be back on the general surgery service next month. I'm also learning that I don't do well with free time, and I seem to be happier and more productive when my schedule is busier (I'm weird, I know!). The good news is in a little over two weeks, I will finally get my first true break of the year since I will be off New Year's week, prior to going back to general surgery, and I can't wait!!!!

That pretty much sums up the past month and a half. I know I always say I'll be coming out with more posts shortly, and then get too busy to post, but this month will be different. Not only is my five-year blogiversary approaching (stay tuned for a sweet surprise!), but my writer's block has resolved and I have a lot to say right now. Plus, I'm currently in the middle of working a 24 hour call shift, but rounds are over and my patient list is tidy, which means I actually have time to type a few future posts right now :) Stay tuned and I hope everyone has an amazing weekend!