Featured on The Kitchn!!!!

Happy Wednesday!!!! Today I was beyond honored and excited to find out that I have been featured on The Kitchn!!!! The article is part of a series detailing how five successful women handle Mondays, and I am absolutely amazed that they reached out to me to be a part of it. So far they have featured the New York Times bestselling author Jill Stokler, and actress Sarah Michelle Gellar. I am nowhere near the level of success of these women, so I am extremely humbled and appreciative of the fact that I am included in a series with them. The feature can be found HERE so feel free to check it out or click on the above picture to read in full!

This past weekend, I had the pleasure of attending the Student National Medical Association’s National Leadership Institute and Board of Directors meetings in Columbus, Ohio. It was sponsored by Nationwide Children’s Hospital along with The Ohio State University College of Medicine, and they did an excellent job of hosting the organization.

The event was sold out, and I was extremely happy with the amount of pre-medical and medical students alike who attended. There was also a great variety of excellent speakers. I had the opportunity to help our Region V Director present an “SNMA 101” workshop, and it was a pleasure being able to engage the medical students in attendance. It was also a great networking event, and I was excited to meet and chat with some of the surgeons and other physicians in attendance during our dinners. 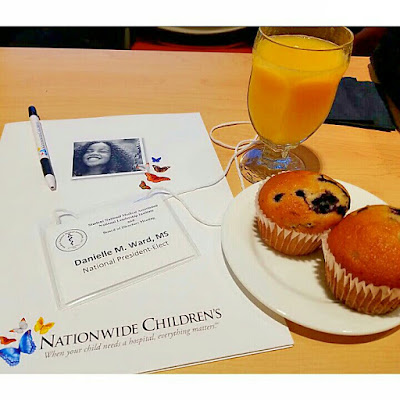 I flew into Ohio directly after taking my shelf exam on Friday, and my schedule was super packed, so I did not get a chance to go out and explore Columbus.  I was very impressed with the little I was able to  see though, and I will definitely be adding OSU to the list of places that I would like to do an away rotation with next year.

All-in-all, I had a wonderful time in Ohio and it’s always a great time when I am with my SNMA family. We were able to get a lot accomplished, and I am looking forward to what the rest of the year brings :-)

Happy Monday! It’s been a while since my last post, but that’s just because I’ve been super busy (as usual, LOL). I’m also pretty behind on reading my emails, but I plan on being caught up by tomorrow night at the latest if you sent me a message and are waiting on a response.

I finished up my surgery rotation last month and now I am making my way through pediatrics. It’s definitely been a huge adjustment from surgery, but I am learning a lot and everything beats sitting in a classroom all day. I was absolutely in love with my general surgery rotation though, and I found every minute of it exciting and full of great learning experiences. My preceptor even gave me an Honors Pass at the end of the rotation, and hopefully I performed well enough on my shelf exam at the end of the month to keep it. The way it works is a student has to honor the exam in order to keep an honors grade, but if you just pass the exam with an honors evaluation grade, you end up with a High Pass. Since I’m interested in surgery, I probably won’t be happy with just a High Pass, but we’ll see how things go. The shelf exam wasn’t too bad, but I had quite a few questions on cases I hadn’t encountered at all during my month of general surgery.

When it comes to pediatrics, I’ve completed two full weeks of the rotation, but it feels like I have been on it for six months. I had really long days during my general surgery rotation and would come home extremely energized, but eight hours a day on pediatrics has me super drained! It’s not even the children that I have a problem with, as they tend to be really interesting. I think I just thrive in intense environments, and it’s been a huge change going from being a member of a surgical team and seeing patients on my own to essentially just shadowing all day long and not being able to do much. Either way, I will make the best out of it and try to learn as much as I can, because I will never have the opportunity to have some of these same experiences again.

So far, I have seen some interesting cases that before now I only had the chance to see in textbooks, so it is nice being able to tie what I’ve learned in the classroom with what I see on a daily basis in the clinical setting. The other plus side to pediatrics is the variety of cases. I’ve had the chance to see orthopedic patients, patients with neurological issues, hematology and oncology patients, and pretty much a little bit of every subject I was taught my first two years of medical school. I’ve also been doing pediatric UWorld questions nightly, and it’s kind of fun getting questions similar to something I saw earlier during the day.

Anyway, it’s late and I still have work to do, so I’ll end here, but until next time!