Most people will tell you that with a low undergraduate GPA the best course of action is to pursue post-baccalaureate studies or a special master’s program (SMP). A post-bacc typically consists of attending an undergraduate institution as a non-degree seeking student and taking advanced science classes as a way to boost your undergraduate GPA. A typical SMP takes place over a year, and it involves taking medical school classes or advanced science classes and receiving some sort of certificate afterwards. There is no guarantee of acceptance into medical school after completing either program, and as far as I know, the certificate offers no benefit to employment opportunities.

As a non-traditional student and single mother, none of these options were desirable or financially feasible for me. Pursuing a post-bacc meant that I would have to pay out-of-pocket for classes that I had already taken before getting my bachelor of science degree. As a biochemistry major with a minor in chemistry, there were very few advanced science courses that I had not taken (or re-taken for that matter), and it felt like it would be a complete waste of time. An SMP would have allowed me to take advanced classes, but with no guarantee of an acceptance to medical school and not much to show for it other than a certificate, I thought this was also a bad idea. I had a friend who completed an SMP at a medical school with hopes of being accepted, and despite good grades, unfortunately she was not and did not know where she would go next. This further steered me from the SMP route.

I decided that it would be best to obtain a master’s degree in biochemistry, but I needed something that was a bit more convenient. I work full-time at a university doing research and as an employee I am entitled to six hours of classes each semester tuition-free (only three of those hours can interfere with work time). Unfortunately, most of the classes I needed to take were offered in the morning, and this is the same time I am heavily doing experiments. I am also finished with my day by the time my daughter gets out of school, so evening classes were also out of the question.

What online school did you attend?

I attended the University of Saint Joseph located in West Hartford, CT. This is an actual institution that was founded in 1932. I do not believe they offer undergraduate degrees online, but they offer some graduate degrees online. This is mostly to benefit those students who may be overseas serving in the military or others who may not be able to physically attend an institution. The link to their online graduate degrees can be found HERE (scroll to the bottom). They say that the program can be entered to at any time, but the classes I took all followed the university schedule with set start and end dates. I took the non-thesis track since I live in a completely different state, but they also offer a thesis track.

How were you able to enter into the program without meeting the minimum GPA?

For the USJ Biochemistry MS program a 2.8 GPA is required, and for the Biology MS program a 3.0 is required. Like I have previously mentioned, my undergraduate GPA was a few points below a 2.5. Thankfully, the school took pity on me and allowed me to enter into the program on probation. I had to take six hours of courses and do well, and I accomplished this by starting during the summer semester with cell biology and biochemistry I. I passed each class with an A-, submitted my letters of recommendation, interviewed with the program director, and was finally accepted into the program.

How did you pay for the program?

For the first semester on probation, I was not considered to be a matriculated student for financial aid purposes. Because of this, I had to pay out of pocket for my first two classes. I took out a private loan for $5000, and this gave me enough to pay for classes, books, and a new laptop. After I was accepted into the program, I qualified for federal loans, and that is how I paid for the remainder of the program. I just want to note that if you can avoid taking out private loans, then do not go that route. They are a horrible beast when it comes to interest rates and payment plans.

From what I have found, most medical schools do not accept online classes taken as an undergraduate student. My undergraduate degree was taken in the traditional way, so I did not need to worry about any medical schools rejecting my prerequisite courses. I did run into a few medical schools that do not accept any online coursework at all. Some of the people I spoke to in admissions held the belief that there is nothing better than actual classroom learning, but I think this is a completely backwards way of thinking. Everyone has a different way of learning, and I do not believe people should be penalized for doing what works best for them. If you are concerned about whether or not a school will accept your online coursework, the best thing to do would be to call them directly. Even though my transcript does not reflect that my courses were taken online, I fully disclosed this in my interview. For me, it would have been extremely hard to hide the fact that I live and work in the South but attend school in the North so I put it all out there.

ABSOLUTELY NOT! My online classes were the first time that I’ve ever had to work to get a good grade. You constantly have to log in and engage in discussion, and there are assignments due every week. This past semester, I was literally submitting 5-7 page essays every week on top of discussion board posts, and essays in my other course. I also took my comprehensive exam this past semester, and that was two days of pure torture. The funny thing is that in addition to my online classes, this semester I also took a regular class (virology) at the university where I work and it was so easy! I attended every class, zoned out, studied a day or two before each exam, and did great! The university course also gave multiple choice exams which is something you don’t get very often in online courses, and I found these exams to be super easy. It really made me wonder where I went wrong in undergrad.

To give an example of how hard online classes can be, I’ll use my chemical thermodynamics course. This was a calculus-based class that involved things such as deriving the Gibbs free energy equation and other well-known thermodynamics equations. I had not taken calculus since 2006, so I had to use outlines to help me with integrations and everything else in the course. Also because it was an online course, we had to figure out how to draw out all the equations using computer programs. It became so frustrating to me that I started handwriting everything and just scanning it in and submitting it. I am thankful that my professor allowed some of use to do this. The class also involved entropy and other calculations. There were definitely times I wanted to cry in the course, but I pushed through and made out with a B+. I learned a lot though, so I would say it was well worth it.

Online courses require a commitment like no other, and many people find that it is not the right route for them. I am more of a self-directed learner and do better when I have to take control of my learning. With traditional classes, it is easy to put everything off and just cram for exams, but online classes do not allow this. Also, I never really bought any textbooks during undergrad because the questions mostly came from powerpoints. For my online classes, I bought and used every single required textbook. There were no lectures and only a few of my classes had powerpoints, so I had to use Youtube and other sources to fully understand the material.

Did you have to find a proctor for exams given online?

For the most part, exams consisted of essays and term papers. For classes that required mechanisms or equations, we would use computer programs to do this. My pharmacology course had open-book exams that consisted of half multiple-choice half essay questions, but even with the book right in front of me it was hard. As a matter of fact, a lot of my courses had open-book exams but I definitely had to know the material to answer the questions correctly. 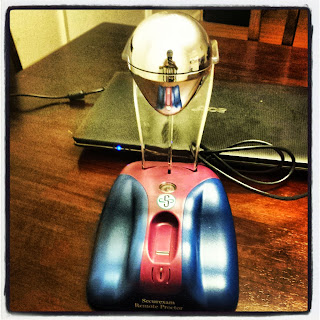 The only time I did need a proctor was for my comprehensive exam. The exam consisted of six individual closed-book exams given over the course of two days. It was required for me to be able to officially graduate with my master’s degree. For this, I was sent a really cool robot proctor, which I attached a picture of above so you could see for yourself. This thing took my fingerprint, had a 360 degree view of the room I was in, recorded sounds, and locked my computer from accessing anything other than the exams. It would be easier to cheat in a traditional classroom setting than with this thing!

Why I chose to get a full degree

I learned with applying to medical school that nothing is guaranteed. I wasn’t going to spend thousands of dollars and not have much to show for it. I also figured that if I received a full master’s degree then I could seek better employment opportunities due to having an advanced degree. I was prepared to take however long it took to try to get into medical school, but I had to be smart and think about my child as well. Also, research grants end and renewal is not guaranteed, so I wanted to make sure that when that time came I would be equipped with all the skills to move into other fields. Now I no longer need to worry about that, but it feels good to have the extra credentials. The experience has also helped me learn a lot about my learning habits, and hopefully it will be of benefit to me when I enter medical school in the fall.
at 4:25 PM