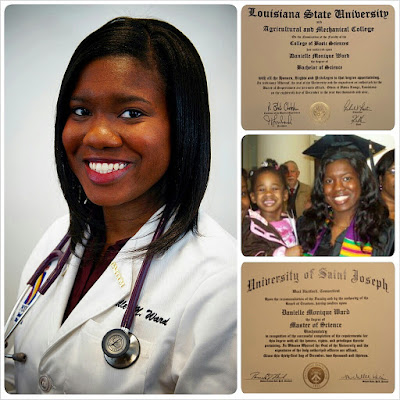 I skipped my senior year of high school and attended Kennesaw State University full-time as part of their Joint Enrollment Honors Program. I had a baby my sophomore year of college, went through a divorce, and STILL managed to graduate with my class with a Bachelor of Science degree in Biochemistry and a minor in Chemistry from Louisiana State University. Later, I received my Master of Science degree in Biochemistry from the University of Saint Joseph. Now, I am 2 years away from receiving my Doctor of Osteopathic Medicine degree from Philadelphia College of Osteopathic Medicine - Georgia Campus. So, how's that for a slow track? ‪#‎StayMadAbby ‪#‎ByeScalia

If you follow me on any form of social media, then you’ve already seen the above picture and comment that I posted in response to the Supreme Court case involving Abigail Fisher and the University of Texas Austin. Typically, I’m not one to post anything political or news-related to the blog, but I just couldn’t help myself when it came to this issue.

In case you are not aware of what I am talking about, Abigail Fisher was rejected from UT Austin back in 2008 and decided to sue the school on the basis that she was rejected because of her race (she’s white), and the school’s affirmative action policy allowing a minority to take what she believed to be her spot at the school. Never mind the fact that she didn’t actually have the GPA or stats to get accepted into the school in the first place. In the case of Justice Scalia, he cited a brief earlier this week that said something along the lines of blacks should attend “slower track” schools where they can have a chance of doing well. I won’t get into all the specifics here, but what I have written is to just give you an idea of the background. You can Google the rest if you’re interested.

So why did I feel compelled to put in my two cents? It’s simple really. Most of my life people have thought most of my accomplishments have come from being given a hand up due to my race. This is probably especially true now when people learn that I am in medical school despite having extremely low undergraduate stats. If you've been reading my blog from the beginning, then you already know that there is a lot to my background that contributed to some of my low stats, and that my numbers don't even tell half of the story. But to hush up all the naysayers, I’ll just say this: All my accomplishments are the result of hard work and dedication, so for anyone to think I made it this far by taking the spots of "more deserving" people is pure BS! My stats may have been low during my undergraduate years, but I was doing more and going through more than most people. Find me a person who can raise a child as a single mother (without the help or money of their family), work two jobs, stay heavily involved in extracurricular activities, AND maintain a high GPA while pursuing one of the hardest degrees at their university, and I’ll shut up, LOL. There is nothing “slow” about the track that I have been on, and if anyone feels that I might have taken their spot either in college, grad school, or medical school, then they should probably take a second to stop and check their unspoken privilege at the door. So go ahead and stay mad, Abby, because I am going to go ahead and continue to be great.