Wow!!!! Where do I begin? This year’s Student National Medical Association’s (SNMA) Annual Medical Education Conference (AMEC) in Austin, Texas was an absolute blast!!!! I think I’m still in a bit of shock from everything, but I will do my best to give a thorough recap of my time at the conference. I also know that some of you don’t like when I write extremely long posts, but if you hang in there, I promise I have some exciting news at the end ;-)

This was the first AMEC where I was responsible for some of the workshops and speakers, and it was also the first AMEC where I would be running for an elected position. Last year, I had the amazing opportunity to present my very first workshop at AMEC, and I also applied for an appointed position that did not require campaigning, so it was definitely a very different experience being on the opposite end of things. While the first order of business was attending a Board of Directors’ meeting a few hours after I arrived that Wednesday, the conference really started for me the next day. At 8am on Thursday morning, I had to give a two minute presentation to the board and answer any questions that they had. Then I left the room for discussions, and spent most of my time outside in suspense with the other individuals running for elected positions. Once that ended, I was off to the opening Plenary Session, followed by a delegate certification, and then a House of Delegates session. Once one of my classmates came to relieve me of my delegate duties, I was then off to find Dr. Vania Manipod (freudandfashion.com), who was presenting a workshop that focused on osteopathic medicine and psychiatry. It was an absolutely awesome session, and I was extremely happy with the turnout!

After the workshop, I went back to my room to prepare for my presentations that evening. Regional meetings were to take place from 8-10pm, so I had two hours to hit up every single region (there are ten), give my presentation, and answer any questions that the members had for me. I was soooo thankful to have one of my classmates offer to come along with me and hand out my campaign materials while I presented (shout out to Nick from hungrymedstudent.com!). We were literally running between multiple floors of the hotel, and I was switching between heels when I entered the meetings to my flats when I was out in the hall because my feet were killing me! Luckily, we were able to reach each region, so it was definitely worth it. After that, I had to attend a 10pm mixer that my co-chair and I had arranged with my osteopathic committee, and then I was off with my classmates to find something to eat before I happily went to bed.

The next day was just as busy, and started off with me presenting to the House of Delegates at 8am. The President’s Luncheon was also held that afternoon, and my co-chair and I were pleasantly surprised when our Osteopathic Schools committee won the SNMA Committee of the Year Award. It took a ton of hard work and team work to make this year successful for our committee, and I am so thankful to have had a co-chair who was just as dedicated, flexible, and hardworking throughout the entire year. As for the rest of the day, there were more House of Delegates sessions, I was able to interact with members at the Meet the Candidates session, and I finally got a chance attend my region’s meeting. We also held our Osteopathic Schools reception that evening, and it was a major success. Dr. Will Stubbs and Dr. Matthew Montgomery gave valuable commentary on the issue of diversity in osteopathic medicine, and we had a very large turnout, which was a huge deal considering we were somewhat competing with other receptions at the time that were giving out things such as free drinks or unlimited lobster buffets. So with that being said, we definitely are sending a big thank you to the AOA for sponsoring our reception which allowed us to feed everyone in attendance, and we appreciate the many physicians, medical students, AACOM, and pre-medical students who attended and engaged in the discussion on diversity in osteopathic medicine :-)

After the reception, I went back to my room for a bit to relax, and then I did something that I rarely do: I went out and partied! The first official after party was held that night at Club Rio, and I had a blast. I think the last time I went out and danced the night away was back in August for my friend’s birthday party, so it was very much needed.

The next day, I had the chance to meet Dr. Damon Tweedy, and not only was he signing copies of his book Black Man in a White Coat: A Doctor's Reflections on Race and Medicine, but he was giving the books away for free!!!! It was definitely worth the long wait in line to meet him and get a personalized autograph from him. And speaking of authors, I forgot to mention that I ran into Dr. Antonio J. Webb, author of OVERCOMING THE ODDS: From War on the Streets in Louisiana to War on Terrorism in Iraq, How I Successfully Overcame the Odds, the day prior and had a chance to not only take a picture with him, but chat about the road to surgery.

After meeting with Dr. Tweedy, I headed over to the Osteopathic Medical Student workshop to get that prepared and meet up with my committee members who would be on the panel. The workshop went great, but I had to leave in the middle of it when I received an emergency text from the then-National President-Elect/Elections Chair saying that I was needed urgently and it could not wait. I rushed to her room and was informed that neither myself or my running mate received 51% of the vote (some delegates abstained from voting), so a run off would have to take place that evening at the banquet. Apparently, this hadn’t happened in ten years, so it took everyone by surprise. I was told that I would have 90 seconds to address everyone at dinner that night, and then a re-vote would promptly take place. I’m not gonna lie, I had a slight freak out over this, but I was able to meet with some of my friends and mentors for a few minutes to go over how I would approach the situation, and this calmed me down a lot. I then went back to my room, prayed on it, and then proceeded to write out my thoughts while having my classmates on speaker phone for their feedback. I did this right up until the reception, and I was still writing out what I wanted to say when I sat down for the dinner.

I can’t explain the stress of having to stand up in front of over 1300 people and explain in 90 seconds or less why I was the best candidate for the position of National President-Elect, so I’ll just say it was definitely quite the experience. I was beyond thankful to not only have my classmates sitting with me, but my peers from the PCOM main campus sitting around me and offering their support as well. They gave me great laughs that evening, and it helped to take away from the anxiety of waiting until the end of the banquet for the results to be announced. 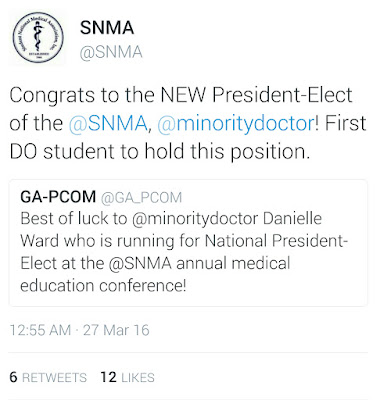 At close to 11pm, the results were finally announced, and I won!!!!! I was sworn in right after and I am now the 2016-2017 National President-Elect for the Student National Medical Association! I am also excited that I will become the 2017-2018 National President at next year’s AMEC which will take place right here in Atlanta! Words can’t express how deeply humbled and grateful I am for the opportunity to not only continue to serve the SNMA, but to be able to put my passions into action. I am also the first ever osteopathic medical student to be elected into this position, so I look forward to proudly representing the D.O. students well.

I just realized I wrote a lot on this post, so I will end here, but I included a picture slideshow at the bottom which will hopefully include everything I missed (for some reason I can only view it when I open internet explorer or click the logo at the bottom right of it). I can’t wait to continue to share my journey with you all, and I hope that you will continue to read. As you can see, things are about to get even busier, but I am looking forward to the ride and everything that it has in store. Until next time!