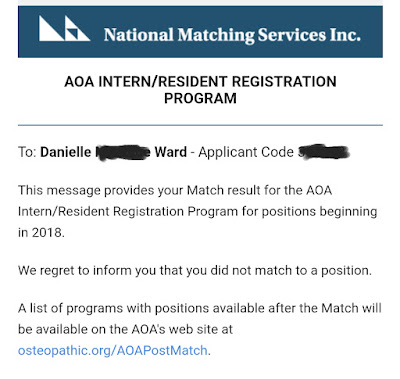 ***Disclaimer: This post starts off pretty bad, but there’s a happy ending!***

On February 5, 2018 at 7:54am, my worst nightmare happened. I found out I did not match. I was in the process of driving to my rotation when I received the above email. I immediately turned my car around, texted my attending the news, and headed back home. I was beyond devastated, and just wanted to crawl into a deep dark corner and remove myself from the world. I think for about the first 30 minutes, I just sat on the couch in silence and in shock. Then I called my school to figure out the best way to proceed. They let me know that the list of unfilled programs would be available in a few hours and to start making calls at that time. The next thing I did was call a good friend of mine. 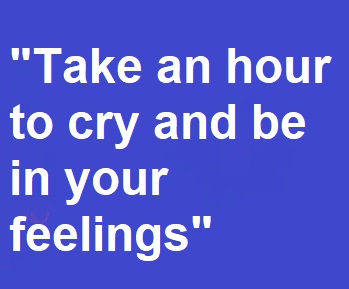 The friend I called was someone who despite now being a surgical resident, did not match the first time either, so I knew he would have good advice for me. His advice was “take about an hour to cry and be in your feelings, then suck it up, take the depression out of your voice, and get your ass on the phone!” So that’s what I did. I hung up, cried a few tears (an extremely rare occurrence for me), and when the list became available, I was calling and emailing programs. There were only two categorical surgery programs available, and a ton of internships, internal medicine, family medicine, and other categorical spots available. My heart just wouldn’t let me apply to anything that wouldn’t get me to my end goal of becoming a surgeon, so I only applied for surgery and internship positions.

The calls turned out to be successful because by the end of the day, I had completed a few phone interviews and was offered multiple different contracts at programs around the country. The only problem was some of the programs wanted me to sign their contracts right away (I’m talking within an hour of receiving), and others wanted me to consider taking a spot in their other unfilled categorical programs such as internal medicine. This completely stressed me out! The only program that actually took the time to consider what I wanted was the one at my home institution. They not only offered a general surgery based traditional rotating internship, but they said that they would hold onto the contract and give me a few days to think about it. So, to make a long story short, I happily accepted the contract for a Traditional Rotating Internship (General Surgery Specialty Track) at PCOM, and will be starting my first Resident Physician job in Philadelphia this summer.

For those who are unaware, there are actually two matches that take place. The AOA (DO) match typically occurs the first week of February, and the NRMP (MD) match occurs around the second or third week of March. DOs can participate in both matches, but if a student matches in the DO match, then they cannot match in the following match. MD students only have the option of one match. I was registered for both matches and had ranked programs for both, but after receiving the AOA email, it forced me to think about what would happen if the same thing occurred in March. The NRMP match includes MD, DO, and IMG students, so the pool is a lot larger and it’s easier to end up not securing a spot anywhere. As a single mother, and someone with a ton of student loans, I could not afford to take a year off after graduating from medical school. It was crucial for me to secure a position and the salary that comes along with it. I held onto the contract until the last week before it was due, but after having an unsuccessful interview with one of the programs with an open categorical general surgery position (they were more concerned with the fact that I have a child rather than my abilities as a future resident), I mailed in my contract and now there is no looking back. I don’t have to worry about how I am going to feed my child next year, and she’s just happy that her mom is going to be a doctor :) 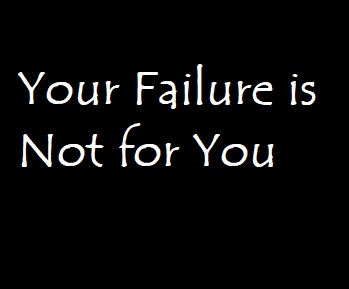 I originally struggled with the idea of writing a post about my match day woes because I didn’t want the extra attention. I haven’t exactly been a low key medical student, so it felt extra shameful to be someone who recently received the highest award given by my school, has multiple newspaper articles written about me, and serves as national president of an organization, but apparently wasn’t good enough to match into a general surgery program. When I told my friend about this and wanting to just stay quiet and pretend like it never happened, he said something that I found to be so profound: “Your failure is not for you.” He then went on to explain that if he hadn’t previously shared his story with me, then I wouldn’t think I could go on to accomplish my dreams as well. He was completely right. So I wrote this post with the intention to not only share my story with those who might have similar circumstances, but also to give me something to look back on when I do finally become a surgeon. I might have added an extra year to my training, but I see this as an opportunity as opposed to a failure. I will accomplish my goals of becoming a surgeon, and I look forward to taking this year to kick butt as an intern whiling proving that I would be a valuable asset to any surgery program. I just hope you all will stick around for the ride.

For those who matched this week and last month, congratulations, but please remember that it didn’t come as easy for some folks as it did for you, and that there are others still out there struggling to scramble into a spot. For those currently in the SOAP/scramble process, please keep your head up and know that you are not alone. Utilize your school, mentors, and resources to secure a spot. You will get through this and end up where you are meant to be. And for those like myself, who did not match into their desired spots, but managed to secure a position, rejoice in the fact that you are blessed have a job! Finally, to all my fellow fourth year medical students, we’re almost to the finish line! Graduation is literally right around the corner!!!! Congratulations on making it this far in your careers, and I look forward to having you as my future colleagues.