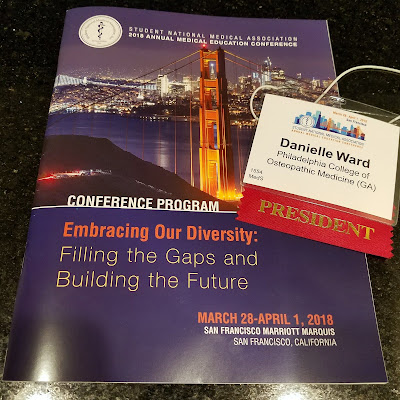 Last month I officially ended my tenure as National President of the Student National Medical Association (SNMA) with a successful Annual Medical Education Conference (AMEC) in San Francisco, California. If you’ve been following my blog for a while, then you know that I hold the SNMA near and dear to my heart, but it has also taken up A LOT of my time over the past few years. This past year was especially taxing as I not only had to make sure my executive agenda was being implemented by our base of over 7000 members, but I also had to plan and organize three National Leadership Institutes, our annual conference, and stay the “face” of the organization, all while being on surgery audition rotations and completing other medical school clerkships. To say I’ve been busy is an understatement, but despite it all, it was an experience I wouldn’t have traded for the world. 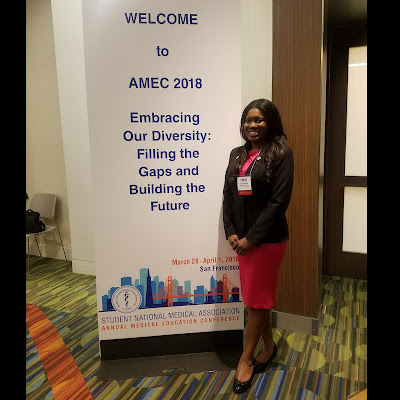 The SNMA AMEC takes place every year the four days leading up to Easter Sunday, and it takes over a year to plan. As SNMA National President, my major role in AMEC was conference programming. This meant developing the theme for the conference (including coming up with the title and description), putting together workshops that fit within the theme, making sure each national committee had a role in the conference, and working with the convention planning committee to make sure everything was on track. I even got to pick out the food for my luncheon, and meet with key hotel staff, so that was pretty neat. Our National Headquarters staff took care of logistics such as figuring out which rooms to put speakers in, costs, sponsors, and other technical details, but for the most part, the majority of the conference falls on the president. Yes, this was essentially “my” conference, so the stress levels were to the max to make sure everything went smoothly and that everyone attending had a great experience. This conference was also extremely important to me because the very first AMEC I ever attended was as a pre-medical student in 2007 at the same location in San Francisco. It was definitely a full-circle moment for me!

I arrived in San Francisco on Tuesday, and the first point of business was helping to stuff bags for the conference attendees, followed by a pre-conference meeting with hotel department personnel. When we walked into the room we were greeted by about 20 friendly individuals from the hotel. We then discussed how we wanted the week to go, and I was very pleased that everyone was interested in my wants for the week. I was even given a VIP pendant so that I could be identified by hotel personnel in case I needed anything. I think the only major concern was that I had requested beef for my luncheon which was to take place on Good Friday, but after discussing with the hotel chef, I happily switched it with the fish that was being served for the Saturday banquet.

Since Tuesday’s task list didn’t take too long, and the first meeting on Wednesday didn’t start until 5pm, I was blessed with some free time to relax and explore before the conference craziness started. I linked up with an old high school friend who lives in the area and is also a great photographer, and we knocked out my graduation photo shoot. We also took a short trip to Pacifica, California where I got the chance to hike the trails and take in some awesome views. It was a very much needed calm before the storm.

Thursday was when the real work began. My day started with an 8am Board of Directors meeting where we discussed business and heard the presentations from candidates running for office. After that, it was off to the opening Plenary Session where I met with the speakers beforehand, gave a few remarks, and then listened to a great keynote speech by Brigadier General Telita Crosland. After that, we rushed to the exhibit hall where we had to do the opening ribbon cutting ceremony. I was actually surprised that I had a little time to visit some of the exhibits this year, and it was great meeting and interacting with some of the members. Sadly, I didn’t get to attend any of the workshops, and the rest of the day was followed with a 2-hour House of Delegates session, a Stanford reception, and regional meetings. I didn’t make it back to my hotel room until after 11pm, and I was too tired to participate in any of the night events. Luckily, the hotel gave me an AMAZING presidential suite with a breathtaking view of the city, so I was very happy to relax, listen to music, and enjoy my room.

Friday was more of the same schedule, but it was an exciting day since it was also when I held my Presidential Luncheon and passed down the reigns to the new national president. The keynote speaker for the luncheon was my phenomenal mentor Dr. Velma Scantlebury (the first black female transplant surgeon in the US, for those of you who don’t know), and she gave a phenomenal talk. We also didn’t go over on time (the luncheon is only scheduled for 2 hours), which rarely happens! I was ecstatic! The rest of the day was a lot less busy after that, but I was still swamped with things to do, so I was extremely grateful for Dr. Scantlebury and my mentee who went out and picked up a cake I ordered along with drinks and supplies so that I could throw a surprise get together for the national committee chairs later that evening. I also had to briefly speak at the Osteopathic Schools reception being held that evening, but it was an absolute pleasure meeting with Dr. Adrienne White-Faines, the CEO of the American Osteopathic Association (AOA), who even gave me a twitter shout-out!

I just realized this post is super long, so I’ll do a quick wrap-up of the rest of the conference. Basically more meetings, a great pre-medical luncheon, and a closing banquet with a graduation component for the 4th year medical students complete with a gorgeous blue graduation stole, free membership into the NMA, and a great keynote speech given by Dr. Zoanne Clack (one of the writers for Grey’s Anatomy and also a proud SNMA alumna). Overall, it was an amazing conference, and I received a ton of great feedback.

I am so incredibly blessed to have had the opportunity to serve as the 2017-2018 SNMA National President, and I am even more thankful to have served with a fantastic Chair, Vice-President, National Committee Chairs, and the Board of Directors. There are honestly no words to describe how good it felt seeing my vision come to life, and this past year has been an experience I won’t forget. I look forward to continuing to serve this amazing organization, and I can’t wait to see what the current SNMA president accomplishes this year. I’m also excited that his conference will be taking place in Philadelphia, PA next year where I will be for residency, so I look forward to seeing you all there!