I Finally Matched and I'm Going to be a Plastic Surgeon!!!! 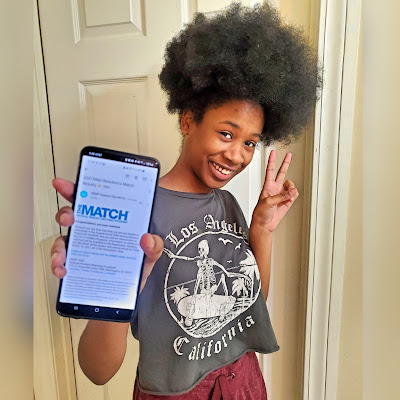 It is with great happiness and exhilaration that I announce I finally matched! Even better, I matched into an INTEGRATED PLASTIC AND RECONSTRUCTIVE SURGERY RESIDENCY PROGRAM in MIAMI!!!!

There are literally no words to describe the flood of emotions that have occurred since March 15, 2021 when I found out I officially matched and seven days ago when I found out where I would be headed. I feel beyond humbled, blessed, and ready to put in the work to become the surgeon I have always dreamed of becoming.

I am still processing, and honestly didn't believe all of this was real until I received my contract the other day, which is why I haven't posted until now. I'm finally ready to share a bit of my testimony, so read on if you'd like to know how God worked everything out in my favor :)

If you've been following my blog, then you already know I was reapplying this year, but didn't want to share any details until after Match Day. I still plan to share my "diary" posts from this season, but to be completely honest, I only ended up writing two posts. Both posts took place after the initial application submission in October, and then life got busy and I didn't write anything else. This post will be my attempt to remember everything since then, so I hope you're comfy, because it's going to be a long one.

I submitted residency applications to every single plastic surgery program and ALMOST every general surgery program (I give them exact number in my "diary" post that I will share separately). During this time, I received a few secondary applications and continued to search the web for various open surgery residency spots (people leave programs all the time and I wanted to make sure I stayed ready). I received zero interview invites up until December, which was pretty disheartening, but I still held out hope as the official plastic surgery interview release date wouldn't be until later.

The official plastic surgery release date was December 4, 2020 and to my delight, I received an interview! I have been actively applying to open positions over the past few years, so I was happy the invite was from a program I had interviewed at in-person right before the pandemic for a second year residency (PGY2) position. I already knew that I liked the residents, staff, program director, and area, so I felt good about the invite. Plus, my previous experience applying to medical school taught me it only takes one interview to make it in (shout out to PCOM Georgia for being my sole medical school acceptance all those years ago!). Beyond humbled and excited for the opportunity, I scheduled my interview for early January so I would have enough time to prepare.

I had my first plastic surgery interview and I thought it went really well. Interviewing via Zoom is an interesting experience, and personally, I prefer checking out a new area, touring the facilities, and meeting everyone in person. I will admit it was nice being able to roll out of bed, throw on some clothes/makeup, and walk downstairs for a quick interview.

Now here's where things get interesting, and you see exactly how God was working on my side.

After my interview in January, I thought the main residency interview season had officially ended for me. I took my birthday trip to St. Lucia, and while I was there (probably enjoying a drink by the pool), I received a screenshot from one of my good friends who knew plastic surgery was my overall goal. The screenshot was a Facebook post from a program announcing their newly accredited integrated plastic surgery program and that they were currently accepting applications. I sent my friend a huge thank you message and put it in my mental note to apply when I got back home since I didn't bring my laptop with me on my trip. A couple days later, while still in St. Lucia, I submitted my rank list (didn't have to put in much thought since I only interviewed at one program), and went back to enjoying myself.

When I returned home, I sent a Facebook message requesting information on the program and was given the contact information for the program coordinator. I didn't have much information on what and how to submit for an application, but luckily I stay prepared. I emailed my personal application packet which is literally 43 pages long and includes everything from my CV to score reports, letters of recommendation, credentials/certifications, and case logs from my previous program in addition to my downloaded official Electronic Residency Application Service (ERAS) application. That may have been overkill, but when the coordinator notified me of what needed to be submitted, I was happy that it was already all included in my original packet.

After submitting my application materials, a couple of weeks went by before I received an interview invite, but when I finally did, I was ecstatic! This excitement was followed by a bit of worry when I saw the interview date and time. My interview was scheduled for March 3, 2021 at 430pm, and for those of you who aren't aware, 9pm March 3rd was the deadline to submit rank lists, and after this there could be no communication between programs and match applicants. I wasn't sure if the program was interviewing to offer spots right then and there, if they would be making their decision later, or if they were participating in the match, which made me a bit nervous. Sure, if they were offering a contract right then and there I would have gladly accepted, but I also wanted to be a part of the match given how much money I had put in it this year. I called my mentor, and she told me to put it all in God's hands since there was nothing I could do or would know until I had my interview.

When my interview day came, I woke up, said a prayer, and was ready to go. My interview was with the program director (PD) and lasted about 45 minutes. I found the PD to be both extremely nice and very honest about the program and challenges that might be faced being newly accredited. I felt extremely comfortable during the interview and the PD took time to answer all my many questions. The coordinator was also present and confirmed that they would be participating in the match, which made me super relieved at not having to make the decision to drop out. Immediately after the interview, I went to the National Residency Matching Program (NRMP) website, ranked the program and recertified my list. I even took screenshots and checked it multiple times prior to the 9pm deadline just to make sure everything was in. ***As an aside, prior to the interview I was slightly concerned how my hair would be perceived since it was still in twists from my vacation, but turns out they didn't seem to care, and it actually came out really nice with my suit. I took the above picture immediately after my interview with only a ring light and my cellphone camera, but I like it so much I think I'll use it for a while as my headshot :)***

A few days prior to Match Day Monday, I was extremely anxious and sick to my stomach. I purposely worked shifts every day and the weekend before the official announcement so I could stay busy, but thoughts of previous unsuccessful match cycles still played in my head. A month prior, I requested the entire week off with the thought that I would receive the dreadful "you did not match" email again and have to spend the whole week in the SOAP/scramble process of trying to get into an unfilled spot. It's a pain that I wouldn't wish on anyone, and it still makes me sad to think about it even though I've experienced it more than once.

When Monday morning came around, I literally didn't even want to open the email. If it weren't for the fact that the SOAP process for unmatched applicants starts an hour after the email announcement, I probably would've waited until Friday. But alas, it was time to get it over with so I could spend the week trying one last time.

When I rolled over, grabbed my phone, and opened it to an email that said "Congratulations, you have matched!," I was in shock!!!! I immediately called my family, but no one answered, so I posted a picture of the email in my family group chat. Only one of my sisters knew I had applied again this cycle (I didn't even tell my parents beforehand), so when I finally got ahold of everyone, they were all confused, but happy, LOL.

Honestly, the rest of last week is a huge blur leading up until Friday when I found out where I would be headed for the next 6 years (yup, the training is that long), but that day was extremely special. My daughter was on spring break, so, as seen above, I allowed her to have the honor of opening the email and reading the results in front of my friends and family both in person and virtually. Well, as you can see from the video above, that didn't quite go as planned as she didn't know where to look, but when I finally took the laptop from her and discovered I am headed to Miami, I was on cloud nine! Even crazier was the fact my brother-in-law found out at the same time that he matched into a general surgery residency program close by in Miami as well. Y'all! I not only matched, but one of my sisters and my nephew will be close by. How insane is that?!?!

I believe that pretty much sums of the last five months of a very emotionally grueling process. I was literally about to give up after so many years of trying, but God stepped in and showed that He will continue to always come through and at the right time. Even more miraculous is the fact that I matched directly into my dream specialty when I thought a general surgery residency followed by a plastic surgery fellowship would be the only way I would ever be able to accomplish my goal. There are literally no words to describe how thankful I am to Him and all those who have cheered me on over the years. I am living proof that delay does not equal denial, and I look forward to putting in all the hard work and showing my program that they made the right choice in ranking me. There's so much more I can say on God's grace and the power in staying faithful, but it's making me super emotional so I'll save the rest for another post. For now, I'll leave everyone with this reaction video of me breaking the news to everyone :)