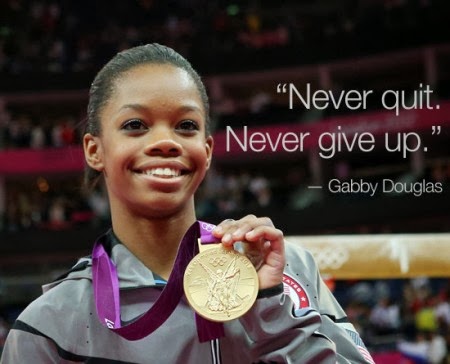 In the spirit of the Olympics currently taking place, I thought this picture was very fitting. One question that I have been asked a lot lately is why I choose to not settle or give up on my dreams of becoming a physician. Oddly, this is also a question that I never really thought about, so it was hard for me to come up with an answer at first. The answer is actually quite simple though. For me, quitting has never been an option, nor will it ever be. I’ve never allowed myself to have the mindset that I could completely fail because then that would have caused me to possibly pursue other options. That’s not saying that I haven’t failed, but when it did happen I looked at other ways of making it work out than just deciding to quit. Personally, I think it’s all about attitude. If you have the attitude that you’re going to be a winner, then eventually one day you will be one. It may not happen when you expect it to, but you have to really trust the process. What may seem like failure is really just an opportunity to define your weaknesses and work on improving yourself. It’s normal for the idea of quitting to cross your mind, but you should also realize the consequences that will come with defeat. I never settled because settling to me is equal to death. I haven’t worked for this hard, this long, and gone through everything I have just to quit. You should aim to live a purposeful life, and giving up and just going through the motions does not accomplish this. I’ve also noticed that usually when people give up they are so close to winning, and I do not want that to be me. So with that being said, whenever I start to feel defeated I just remember that it is always darkest before the light, and that’s what keeps me going.

Email ThisBlogThis!Share to TwitterShare to FacebookShare to Pinterest
Labels: inspiration