A Post for the Pre-Meds: Newly Accepted, but Afraid of Future Failure 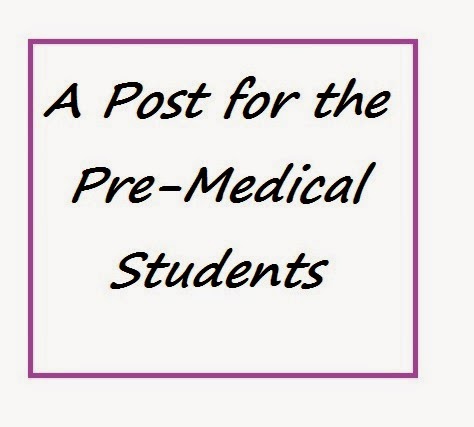 @D Ward Something has been plaguing me. How did you adjust to your first year? I got accepted to WVSOM and I'm trying to think of good studying techniques before starting my first year. How do you know when you are ready? I'm just afraid of having a bad exam lol losing it. I just guess I'm just a little scared of the unknown lol

Sorry to go out of order from answering the questions I have received, but even though this one was asked more recently, I feel it’s a question that many newly accepted students are having at the moment. In my opinion, I don’t think any student entering medical school feels completely ready at the beginning. I mean, sure you might have advanced degrees, honored your way through college, and/or a whole bunch of other things that affirm your ability to handle what is to come, but like any new thing in life, you will still be entering into the unknown. You really won’t know you’re ready until you’re actually in the midst of everything, but you would not have been accepted if your school didn’t feel you were ready for the challenge. Now I am just a first year student myself and still adjusting, but I have felt the same anxiety with each new term, and probably will continue to with each new step.

As for being afraid of having a bad exam, I think it would be pretty hard to complete medical school without having had at least one bad exam. For some people, the word “bad” could mean not making an A on an exam, and for others it could mean failing an exam, so I think the word is pretty subjective. I think it is more important to stay positive and focus on the good, rather than the bad. It just doesn’t make sense to plant negativity in your mind and set yourself up for failure before you even start.

For what it’s worth, I have already had the experience of having failed an exam, and even though I thought it was the end of the world at the time, I still ended up being fine. My second term of medical school was a great one for me, but it was a lot harder for me to adjust to my first term. My worst exam occurred a couple days after the white coat ceremony, and I performed so poorly on it that I was called into a meeting with the Student Progress Evaluation Committee (SPEC). At the time, I thought students were only called into a meeting with this committee if they were a part of the bottom ten percent of the class and in danger of being kicked out, so I completely freaked out. Apparently, this was not the case, but it still really stressed me out. When I walked in the door, the first thing one of the professors asked was “what the hell happened?,” and I was given the opportunity to explain why my performance was so low on that particular exam. At the end, I was basically told to go back to doing what previously worked for me, but I took away a few important points from the entire experience that I have shared below.

Don’t get bogged down with resources

I might be a bit biased, but I’m pretty sure my class beats out any medical school class out there. Not only am I surrounded by a bunch of wonderful, intelligent individuals, but everyone is always willing to help out each other in any way possible. Whether it’s sharing textbooks, websites, notes or anything else needed to succeed, there is always someone in the class willing to go out of their way to help the next person. With that being said, it is so easy to become overwhelmed with all the resources offered! It is so important to identify the best (and least amount) of resources possible that can help you achieve your goals. If you try to use every resource that you are offered, not only will it add more time to your studies, but it might burn you out even faster.

Don’t focus on what (or how) other students are doing

This bounces off the last point, and I know I’ve said it before, but it is so important to do what works for you! You might have a classmate who only studies the PowerPoint slides the night before an exam, and somehow ends up acing everything, or another who spends at least twelve hours a day studying to do well. The reason why I failed the exam that I previously mentioned was because I started focusing on what everyone else was doing. I asked my classmates what worked for them, and then I tried to incorporate everything into my studying which turned into a disaster. Plus, if everyone around you seems to be doing well, and you aren’t, it can cause you to become slightly depressed which will negatively affect your grades.

The first term of medical school I studied a minimum of five hours every day and tried to at least get in sixteen hours on the weekend. Looking back now, this was overkill. I was studying my notes, reading textbooks, doing practice problems, and using board review resources. If I had identified the best resources early on, then my studying time would have been cut in half. I also sacrificed a lot of sleep, which is always a no-no. It doesn’t matter how many hours of studying you accomplish in a day if you have nothing to show for it, so figure out how to make your time most effective. This will also allow for things like exercise and free time which will help you feel like school is not completely consuming your life.

Don’t be afraid to reexamine and change study habits

Going into medical school, you have to be willing to completely change your study habits. Even if you were able to study an hour before an exam in college and always make an A, that is probably not going to cut it in medical school. If simply reading a textbook has always helped you do well, you might have to change that as well, unless you’re able to read through thousands of pages a night, every night. If you tend to spend a lot of time on social media sites or watching television in between studying, you might even have to cut that out if you start to struggle. Medical school is a constant adjustment, with new terms and new professors, so you have to be willing to adapt and go with the flow in order to achieve the best results. In the future, you won’t be treating every patient the same, so there is no reason why you should treat every class the same.

Seek help before it becomes a problem

If you enter school and you feel like you are drowning from the start, seek help! Most (if not all) schools have learning centers designed to help you succeed. They can help you discover your learning style, find you a tutor, and just about anything else you can think of. Don’t wait until you are failing to seek help, but instead get help before you even need it. At the very worse, if you do end up having an entirely bad term, at least it will be on the record that you actively sought out help and it could end up being the difference between being dismissed from a school or given the opportunity to come back and try another year.

If you do end up having a bad exam, it is ok to take a moment and be upset about it. If that means fifteen minutes of crying in your car or stopping everything to take a nap, then do whatever it is you need to do. After that, brush yourself off and try again. Medical school truly is a marathon and not a sprint, so don’t dwell on one bad moment. Use it as an opportunity to figure out your weaknesses and how you can improve. Lastly, realize chances are high that you are not the only one in your class going through the same thing. Failing an exam might seem like the end of the world when it first happens, but I can promise you that years from now when you are finally a physician, it won’t even matter.

I hope this fully answers the question, but as always, let me know if I need to clarify anything. I answered the question about study habits in a previous post (which can be found HERE), so I tried not to be too redundant. But basically, my main point is to not worry about failing out of medical school before you even start, and always be willing to adjust. For the newly accepted students, take this time now to celebrate and relax, because it won’t be too long before you’re in my shoes.