I Survived My First Week of Intern Year!

What a week, what a week! On Sunday, I officially started my first day as a resident physician, and yesterday, I completed my first week of intern year! To say this week has been busy would be an understatement. From the moment I entered the hospital on Sunday, and up until the moment I left Monday morning, things were in full swing. The day started at 430am with getting oriented and rounding on patients, and then the official rounds and work began around 6am. Shortly after that, I was handed two pagers and the consult phone because my senior resident and I were the only ones on surgery for the day, and he was headed into surgery.

It was super scary being given so much responsibility right away, but I had no time to freak out. Nurses immediately started paging me, I had new consults to see, labs to check, and there were so many notes to write (progress, consult, H&P, take your pick). Since I was on call my first day, it meant I was working a 24-hour shift, but honestly, I was so busy that the time just flew by. It wasn’t until after midnight that things finally started to slow down and I was caught up enough to take a moment for myself. I took advantage of this by taking a short 2-hour nap in my call room which ended up being interrupted with another ER consult. Around 3am, I started updating my lists and going over everything since the other interns would be joining me at 4am. After rounds and updating my notes, I was officially post-call which meant I got to go home for the day.

Sleep after being on call for 28 hours is the most amazing thing ever! I didn’t want to sleep all day though since I was back on call Tuesday, so I woke up around 3pm and took a trip to the movies to see Jurassic World. I went to bed around 830, and woke back up around 315am. Then the schedule basically repeated. Thursday was my first normal work day, and it was kind of weird leaving at night. I’m probably an odd person, but I actually prefer being on call since I know I definitely get to leave in the morning, get a decent amount of sleep, and do some normal daytime things. Normal days are weird because there is no guarantee of getting off at a decent time since things can get hectic at any time (as I quickly discovered LOL).

Today was my first full day off since starting, and it was glorious! I slept in until 11am (I went to bed around 11 last night), went shopping for things I needed, put my bed frame and shelves together, and I just ordered food delivery. I am one happy lady!

Tomorrow, I’m back on call, but since it’s the beginning of the month, I’ll be switching to a different surgery service at the same hospital. This past week I was on acute care surgery, and our daily list always had at least 20 patients. The surgery service that I’ll be beginning tomorrow has a much lighter load, so I’m excited for the chance to finally have some time to study during the day, and maybe get more uninterrupted sleep during the night. Plus, the intern on call tonight just texted me and told me to come in a little later than usual in the morning. Woo-hoo!

Even though I’ve been super busy, I can’t help but feel super happy at the same time. This week, I inserted my first NG tube, performed a bedside I&D on an abscess, signed prescriptions with my name for the first time, and even placed my first orders as a physician! I even got paged over the overhead as “Doctor Danielle Ward” and even though it freaked me out, I couldn’t help but smile at hearing my new name being called. I literally break out into a smile when I think of all the awesome things I accomplished this week! After having not really studied much of anything since March, and not doing anything surgery related since November, I was terrified I had forgot all my knowledge. I actually know more than I thought I would, but there's still so much more to learn. Fortunately, everyone has been super helpful during the times I’ve gotten lost, or not known how to do something on the computer, and I ordered some new surgery textbooks to build my knowledge base. 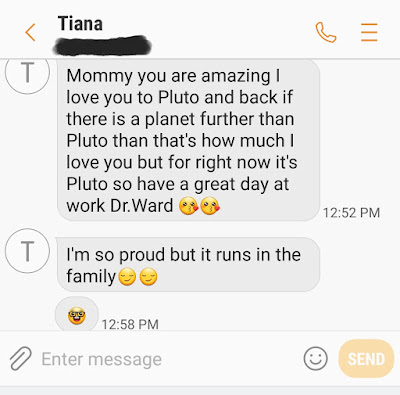 I must say this lifestyle is definitely not for the weak, but I feel completely in my element and blessed to be in the position I am. I still get kind of sad when I think about the fact that I’m not a true categorical general surgery resident (and I’ll have to reapply to next year's general surgery programs in the coming weeks), but I am so happy for the chance to really learn and improve as a physician this year. On top of that, I am living my dreams! Plus, knowing my daughter is rooting for me and not mad that I’m away makes me that much happier. She sent the above text the other day, and it completely made my week!

Anyway, my food just arrived and I’m about to start winding down for the night. Just wanted to give a quick update to let everyone know that I’m still alive :-)