Month One of Intern Year: An Update

Happy Tuesday! Today marks exactly one month since I made the move to Philadelphia to begin my journey as a resident physician. It's definitely been a month full of ups and downs, but for the most part, I can say that the transition into my new role has been a pretty smooth one. When I wrote my last post, I had just completed my first week of intern year. Now I am in the middle week four (yep, my program started a week earlier than the July 1st start date that most people usually expect), and I'm finally starting to adjust to the new life. 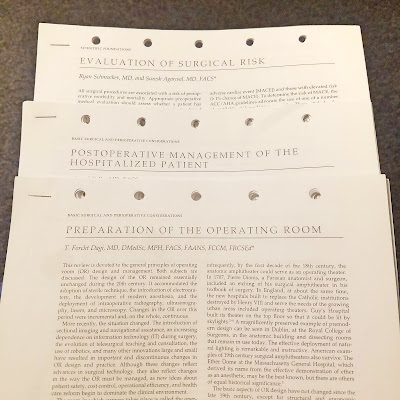 My second week of intern year was a pretty good one. I switched to a much lighter surgery service on July 1st, and after being on acute care surgery my first week, it was a welcome relief. Instead of constant ER consults and emergency cases, this month has pretty much consisted of elective cases and taking care of post-op patients. Plus, during my second week, I not only had the 4th of July off, but a Golden Weekend! For those who aren't familiar with the term, that means I had both Saturday and Sunday off. Plus, I was post call on July 6th, so it was more like having a three day weekend. I've even had time to do my surgery readings. Sooo glorious! I'll be back on acute care at the end of the month, so I'm making sure to take advantage of being able to breathe right now.


During week two, I finally had the chance to get back in the operating room. Intern year mostly involves a lot of floor work such as rounding, writing notes, taking calls from nurses, responding to pages, etc., so being in the operating room is a nice treat. My first case was a neck mass excision. Not a long case, but made me so happy! And last week, I had even more happiness, as I got to go to the OR three times! My first case (and my favorite so far this year) was an extended laparoscopic right hemicolectomy. In layman's terms, we took out a person's right colon using a scope. This was my favorite case because the senior residents were away at orientation and I got to be first assist on the case. As a medical student, I never did much outside of working the camera and closing the patient, so it was super exciting being given the opportunity to make incisions, work tools such as the bovie, laparoscopic grasper, and linear cutter, and then do a large portion of the skin closing. My other cases last week were a back mass excision, and then while on call Saturday, an emergency laparoscopic cholecystectomy (ie we removed a gallbladder). Outside of the OR, I've done a few bedside procedures such as abscess incision and drainage, so I'm constantly having little happy moments that remind me why I love surgery. 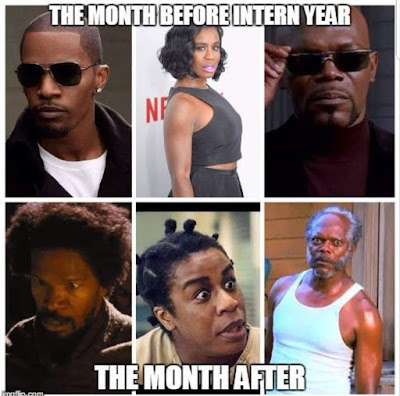 Outside of the small happy moments, intern year so far has been all about adapting and adjusting to the unknown. It seems that most people tend to struggle with this, but it hasn't been too bad of an adjustment for me (but then again, I also haven't started trauma service yet, LOL). I have this weird theory that being a parent has somewhat prepared me for the year which is why I haven't struggled with the transition as much as I've been hearing other interns in various specialties say they do. Before you brush me off as crazy, just think about it. New parents are constantly sleep-deprived, working to keep their new little person alive, always worrying if they're doing the right things, afraid of failure, on a steep learning curve, and desperately trying to ensure they have a life outside of just being a parent. Starting residency is basically the same thing. The exception being you are now responsible for multiple lives, and the struggle is having a life outside of being a doctor. See what I mean?


With that being said, having went through the struggle of being a single parent and juggling a million different tasks on a daily basis, I've learned a lot about time management over the years and making time for important things. Work-life balance has always been super important to me, so since starting intern year, I've made sure to take full advantage of my post call days and the rare times when I get a full day off. My next post will be all about that balance and life outside the hospital, but for now, I just wanted to let everyone know that I'm still alive, grinding, and trying to learn as much as I can. My next post will have all the fun stuff, so stay tuned!