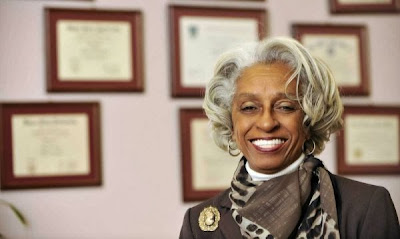 This week’s Minority Women in Medicine highlight goes to Dr. Barbara Ross-Lee. She was the first African-American female to serve as dean of a United States medical school. She is also an osteopathic physician, and sister of the legendary singer Diana Ross. I had the pleasure of meeting her a few years back at a Student National Medical Association (SNMA) national conference, and she really inspired me to pursue osteopathic medicine.  At the conference, she spoke about having to work multiple jobs, which included everything from babysitting to being a teacher before entering medical school. She also talked about the many obstacles she faced in trying to pursue medicine and how many thought that she would not succeed simply because she was a woman. Despite all of this, she not only went on to become a physician and a dean of a medical school, but she has also served in the military and on health committees, authored many publications, became a strong advocate of osteopathic medicine, and did it all while raising five children!

At the conference, she said something that has always stuck with me: “qualifications are a measure of opportunity and not of worth”. This touched me because at times I felt that I was not worthy of becoming a physician simply because I did not have the set qualifications that everyone said I should have. It made me remember that I do have worth and that I should I should always keep that in mind. I’m super excited that I’ll finally be able to prove my worth in the field of medicine, and I’m glad that I’ll bear the same initials after my name as this incredible woman.

If you want to read more about Barbara Ross-Lee, I found the links below to be very informative. I hope she inspires you as much as she has inspired me!


https://www.nlm.nih.gov/changingthefaceofmedicine/physicians/biography_279.html
(side note: I really don’t like how this site lists the career objectives of osteopathic physicians as “osteopathy” as opposed to what exact field they went into)
at 4:41 PM